This morning I resolved to write something about a plank that I lobbied to have added to the United for Community Radio/Rescue KPFA platform in KPFA’s Local Station Board election: “Updating KPFA technology so that KPFA reporters can generate news headlines and stories that challenge corporate media’s dominant narratives on the Worldwide Web.” It seems strange that I need to explain something that seems so basic to the new media universe, but I promised to give it a try.

If you are saying something that radically departs from corporate news, you want people to find it in Google Search or whatever Web browser they may use.  Last week when the Blue Angels Air Show returned to San Francisco, I felt, as I do every year, that someone had to object to this grotesque celebration of war and militarism. The corporate press did nothing but applaud until a few sports reporters joked that the Blue Angels F-18 fighter bomber jets roaring over the Oakland Coliseum might have caused the Oakland Raiders quarterback to muff a pass and lose to the Denver Broncos.

So I wrote a  piece for the San Francisco Bay View Newspaper, The Blue Angels Air Show: San Francisco’s Choice. It got over 11,500 hits, a lot for the SF Bay View, and appeared prominently in Google Search for “Blue Angels San Francisco 2015” throughout the air show and after, so I felt I’d fulfilled my moral obligation to object.

KPFA’s Project Censored, the KPFA Weekend News, and San Francisco Supervisor John Avalos were the only other dissident voices that surfaced on the Web, and the KPFA reports surfaced with their own headlines only because I made a point of posting the discrete audio segments to Indybay.

It seems that KPFA, with its multimillion dollar budget, should be able to generate headlines on the Web at least as well as Indybay, which is all volunteer run, but it cannot, so I sometimes post KPFA reports to Indybay to generate headlines. I’ve often argued that KPFA should develop more of the technology required to generate headlines, or at least make better use of the technology that it already has, since KPFA so often claims – especially during fund drives – to bring us the news that no one else will.  That’s why I had asked that this be added to our station board listener candidates’ platform.

Dire news for KPFA and the Pacifica Network 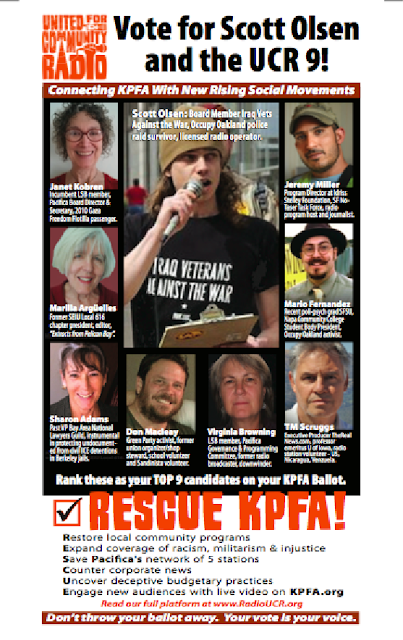 That is all I’m going to say about that for now, however, because the news about KPFA and Pacifica itself is so dire. The Pacifica Network’s very infrastructure, the buildings and the broadcast licenses, could soon be gone.   Consider that:

1)  The Finance Committee of the Pacifica National Board (PNB) just voted down a motion that would have required all the stations to balance their budgets with reasonably projected revenues.

3)  The PNB has been talking about taking out a high interest, non-collateralized loan to meet operating expenses, with no foreseeable means of paying it back.

4)  The PNB has also been talking about taking out a line of credit collateralized by Pacifica property, also to meet operating expenses, and also with no foreseeable means of paying it back.
5)  Despite being in dire financial straits, Pacifica’s WBAI-NYC continues to pay roughly $650,000/yr. to rent a transmitter on the Empire State Building, instead of subletting it for its cost, as their Empire State contract allows, then renting less expensive transmission at 4 Times Square.

6)  Pacifica has lost two million dollars in Corporation for Public Broadcasting (CPB) funds, a million dollars a year for two years in a row, because of its failure to complete audits resulting from its inability to maintain internal financial controls or follow basic accounting procedures.

7)  The California Attorney General is investigating Pacifica consequent to a complaint by former national directors that the current national board majority is financially reckless and irresponsible and that the fundamental record-keeping requirements of non-profit corporations are not being met. The Attorney General’s Office staff confirmed this by telephone.

8)  Despite the Attorney General’s investigation, which included a request for all KPFA Local Station Board meeting minutes, the board has not published minutes of any of this year’s meetings as of October 23, 2015. Why is all this happening? I can’t say for sure, I’m not a mind reader, but such bizarre decision-making looks a lot like controlled demolition. And, lo and behold, as things got worse and worse, it came out – in July this year – that former PNB member, legal counsel and executive director Dan Siegel and former interim executive director Margy Wilkinson had filed secret papers incorporating a secret “KPFA Foundation” with the State of California. This entity, if legally “perfected,” could be used to apply for KPFA’s license if the Attorney General and/or the FCC takes it away.

So forget the subversive Web strategy for now.  I’m so close to speechless every time I listen to KPFA Local Station Board or Pacifica National Board meetings that all I can say is “Rescue KPFA!” (And Pacifica, but this is, most of all, about the Local Station Board election at the station I know best, KPFA-Berkeley.) Please open your KPFA Local Station Board ballot and vote for Scott Olson and the UCR 9: Scott Olsen, Jeremy Miller, T.M. Scruggs, Janet Kobren, Don Macleay, Virginia Browning, Marilla Arguilles, G. Mario Fernandez, and Sharon Adams..